“De and Remanufacturing”, “Smart and Adaptive” and “Digital and Virtual” demo-cases from ESM pilot met last 29th June in Milan to present their progresses as well as next steps related to 2018 action plan. The events was organised in collaboration with some INTERREG projects (3DCentral, SMART-SPACE and GREENOMED) in which AFIL is participating and through which it is trying to expand the partnership of ESM Pilot, coordinated by the cluster together with EURECAT.

More than 60 people from 14 EU Regions attended the events which had the specific objectives of:

In the morning session, Marcello Colledani, coordinator of “De- and Remanufacturing” demo-case, introduced the status of the partnership with the support of other regional representatives from Tampere, Norte, South Netherlands and East Netherlands. Besides the progresses of the regional use-cases, it was highlighted the main achievements of the demo-cases:

Some parallel EU projects (FiberEUse – CarEservice – GREENOMED – SCREEN), developed within the De-and Remanufacturing partnership, were presented with the intent of demonstrating the impacts and results generated by the community in these years while working on the improvement of their concept and business model.
To further support the discussion with concrete application, three local companies (Rivierasca, Italtel and Radici Group) actively participating in AFIL Working Group presented their approach toward Circular Economy.
In the afternoon, after an introduction on ongoing EU initiatives dedicated to Digitalisation of industry, provided by Sergio Gusmeroli, the other coordinators Fabiana Pirola and Coen De Graaf, presented the progresses of their demo-cases and regional use-cases. The final session was dedicated to the industrial presentations from Consorzio Intellimech and TXT focused namely on Data Analytics and Virtual/Augmented Reality.

The event was opened by Valentina Pinna, Lombardy Region delegate in Brussels, involved in the Vanguard Initiative activities, who reported important news discussed during the Vanguard High Level Directors meeting. Indeed, the European Commission proposed a Multiannual Financial Framework Programm 2021-2017 with a budget of 9,4 billion Euros to be invested in interregional innovation projects. If the EU Parliament and Council will confirm this budget, it will be a great opportunity for Vanguard Pilots.
This is an important result driven by the Vanguard Initiative, which was able in these 4 years to couple the innovative bottom-up ideas emerged by the regional stakeholders with a top-down approach of the Regions aligning their RIS strategies and implementing an endeavour lobbying action.

Click on the picture to visit our image gallery 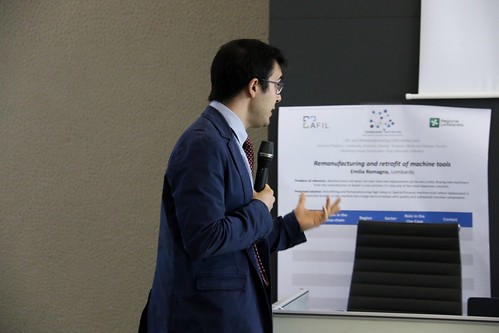